The Los Angeles Rams play home games in SoFi Stadium and have won two Super Bowls (2000, 2022) during their history that dates back to 1936. Legally betting on Los Angeles Rams Super Bowl odds is available at any reputable book, but the best online NFL sportsbooks are revealed in the table below.

These online sportsbooks allow for betting on Super Bowl teams and will feature LA Rams odds for winning a championship all year long, not just in February. The following passages disclose what these Super Bowl sportsbooks offer, how to legally access them in your neck of the woods, and much more.

Yes. Both domestic and offshore sports betting venues provide legal avenues for wagering on Rams odds to win the Super Bowl depending on what US state you are located in. That’s one of the many reasons that we choose to do business with offshore sportsbooks – between our top legal Super Bowl betting sites above, the entire United States is catered to. 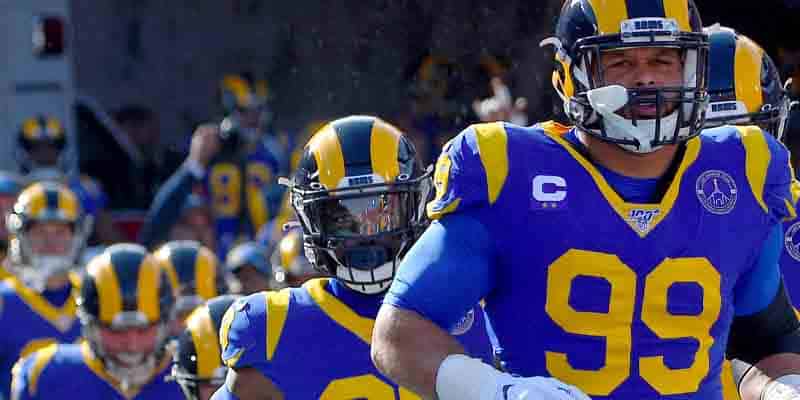 Bet On The Rams To Win Super Bowl 57

The LA Rams were able to topple the Cincinnati Bengals in Super Bowl 56 (LVI) and now they are positioned to repeat as Lombardi Trophy winners in back-to-back seasons. The preseason Super Bowl betting odds for 2023 place them highest overall in the NFC, but project that they will lose to the AFC's Buffalo Bills.

The realm of Super Bowl betting odds is not limited to game lines that appear two weeks before kickoff. The following variety of NFL betting odds allow for Super Bowl gambling throughout the year, with all sorts of different angles for winning some cash based on the Los Angeles Rams winning or losing.

Super Bowl point spreads, moneyline odds for winning teams, and the over/under are what can be bet on in a standard NFL game line. To break down each category, we’ll use the Bengals Rams Super Bowl betting line from 2022 as an example.

The Rams won the game by a score of 23-20 and thus did not cover the 4.0 point spread on the Super Bowl, rewarding those who bet on the Cincinnati Bengals at +4.0. In order for the Rams to cover, they would have needed to win by 5 or more points.

Moneyline odds are for straight bets on winning teams. The odds reveal the amount that can be won as well as the probability of the AFC Champion and the Rams winning the Super Bowl. Rams moneyline bets paid out for SB LVI as they were the victor.

The over/under total is what Super Bowl oddsmakers believe will be the sum of both teams’ scoring efforts. The under was the winning bet for Super Bowl 56, as the total of 43 points was well below the prediction of 48.5.

Whether it is the day before the Super Bowl or the middle of the offseason, NFL futures that include the Rams odds of winning it all will be on the boards and accepting action.

All teams still alive in the playoff hunt will remain listed in the Super Bowl futures, and bets can be made using their accompanying moneyline odds to win. The further out bets are made on futures for the Rams, the higher the payouts will be due to the odds being much longer, but most moneylines will remain in the positive even up until Conference Championship Sunday.

NFL prop bets cover all aspects of game broadcasts, including the performance of teams, individual players, and occurrences outside the field of play. This includes betting on what the Rams head coach wears, if a player’s wife is spotted in the stands, or anything else that has a conclusive outcome.

Most team-based Super Bowl prop bets give insight into how successfully each participant will perform but doesn’t make a concrete declaration regarding winners and losers. SB props for the big game number in the thousands when shopping the LA Rams odds and seem to grow in popularity with each passing season.

Rams Live Betting On The Superbowl

Year-round Super Bowl betting includes live NFL odds that allow for wagers to be placed on the spread, moneyline, props, and the over/under during the first, second, third, and fourth quarters.

As the 2023 Super Bowl nears the conclusion, the odds tend to get tighter and are eventually removed from the boards so don’t wait too long to partake in the Rams live SB betting odds that are in play.

Super Bowl props are also live odds because they remain on the board until a result is rendered. Player prop bets or team propositions for the Rams in the Super Bowl usually stick around for as long as it takes to determine a winner.

While most Super Bowl betting apps require a download to your device to proceed, the online NFL betting sites included within this page can access pro football odds on the fly from iPhones, iPads, and Android tablets and smartphones.

Just use your phone to click on any of the links provided here and watch it turn into a mobile sportsbook for betting on the Rams from anywhere in the USA, depending on which Super Bowl site is used.

Because no download is required, it is much easier for patrons to cruise the Superbowl odds offered at all online sportsbooks with push-button controls that navigation the lines easily.