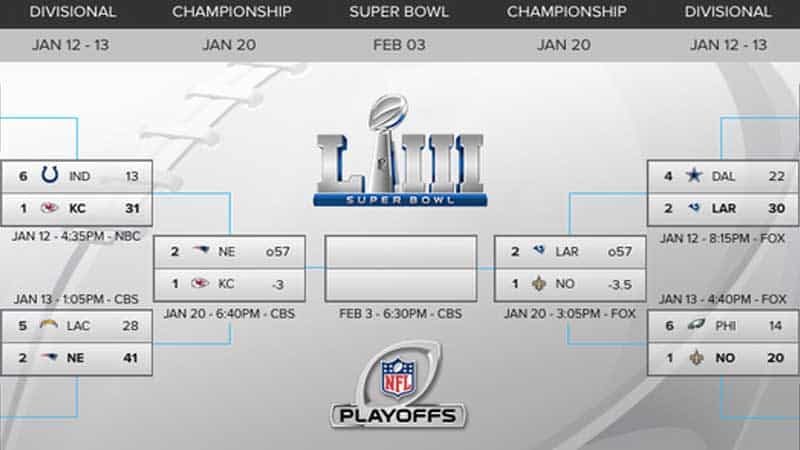 And then there were four.

The 2019 NFL Conference Championships are tomorrow, and there are a ton of ways to bet on the penultimate playoff round prior to Super Bowl 53 on Sunday, Feb. 3rd.

Bovada has the traditional betting line (points spread, money line, over/under) for Rams-Saints and Patriots-Chiefs, but their oddsmakers have also included odds for over 20 prop special for you to wager on.

After tomorrow, we’ll finally know which teams will be the AFC and NFC representative in this year’s big game and hoist the Lombardi Trophy in two weeks. For now, enjoy these football odds, betting lines, and prop bets for the conference championship weekend.

Which quarterback will record the most passing yards?

Which receiver will record the most receiving yards?

Which running back will record the most rushing yards?

Who will have more combined passing yards?

How many total passing yards will be thrown?

How many total interceptions will be thrown?

How many total passing touchdowns will be thrown?

How many total touchdowns will be scored?

What will be the longest successful field goal?

What will be the longest touchdown scored?

What will be the most points scored by any team?

Which team will score the most points?

Which QB-RB duo will have more total combined passing, rushing, and receiving yards?

Will any touchdowns called on the field be overturned?

Will either game go to overtime?

Will there be a defensive or special teams touchdown?

Will there be a fake punt attempt?

Will there be a successful 2-point conversion?

Will there be an onside kick attempt?

Will there be a safety scored?

Who will win Super Bowl LIII?