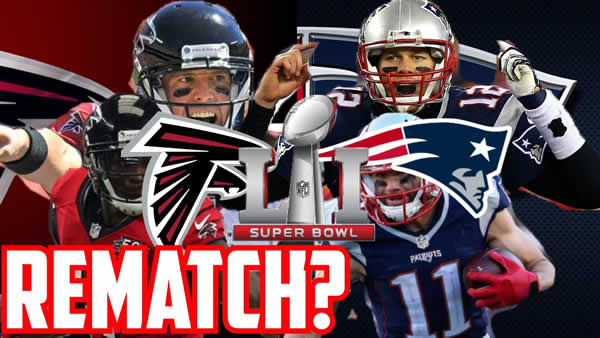 As Super Bowl LII nears, the Playoff picture has become clearer. 2 of the teams still left standing are the reigning champion New England Patriots and the Atlanta Falcons. New England has been performing at their standard level throughout the season, so it is no surprise they are where they are, but Atlanta fought their way to the Divisional Round. With these teams still in contention, what are the odds of a Super Bowl LI rematch?

Everyone remembers last year’s Super Bowl. Atlanta was the most efficient offense all season long and continued their stride into the Playoffs. They put up 28 points in the first half of Super Bowl LI while holding New England to only 3. That type of halftime deficit typically means the game is over. However, the Pats are of a different breed. New England came out of the third quarter relaxed, and while they were still snuffed at almost every drive, they finally managed to score in the closing minutes of the quarter. They went on to score 19 unanswered points to take it into overtime and then score the first touchdown to complete the biggest Super Bowl comeback of all time.

This year, things are a little different. New England lost star WR Julian Edelman in preseason to an injury. Edelman was instrumental in their comeback last year. They managed to pick up promising WR Brandin Cooks from the New Orleans Saints, a fine addition to their already stacked roster. Atlanta entered the new season more or less the same, but their biggest loss came with OC Kyle Shanahan taking the vacant San Francisco 49ers coaching position. Shanahan was the catalyst behind their explosive offense last year. Without him, the Atlanta Falcons clearly struggled to regain their form, not to mention coming off an embarrassing Super Bowl loss.

The Patriots ended up winning the AFC East Division, not to anyone’s surprise. They also clinched a first round bye. The Falcons landed in third in the NFC South, but managed to snag a Wild Card spot to enter the Playoffs. Atlanta’s first opponent was the red-hot LA Rams, a young team that looked promising all season. Many analysts had the Falcons losing, but Atlanta showed signs of life in what turned out to be a dominant win. They scored in every quarter while managing to keep the Rams to 13 points. QB Matt Ryan showcased his grit and experience and the Falcons looked ready to make a Super Bowl push.

New England has an easy path to the AFC Championship. They face the Tennessee Titans in the Divisional Round. Tennessee is a solid young team, especially with QB Marcus Mariota coming into his own, but they stand little chance to the Pats. New England will likely face the Pittsburgh Steelers for a rematch of last year’s AFC Championship, which should be an interesting matchup. Pittsburgh is looking to make up for their loss to the Pats last year as well as losing to them via a controversial call at the end of the regular season. James Harrison, a long-time Steeler, was cut by the team and picked up by New England—more fuel to the fire. Pittsburgh will be a lot tougher than Tennessee, but New England has the tools to win.

Meanwhile, the NFC is wide open. The Falcons are facing the Philadelphia Eagles in the Divisional Round, and while the Eagles are the top seeded team, they are without QB Carson Wentz. Atlanta’s confidence seems to be returning and they certainly have the redemption angle going for them. On the other end, New Orleans takes on Minnesota. That game will be much closer, with the victor being a very tough opponent for Atlanta in the NFC Championship (should they win).

Minnesota is the favorite NFC team to win the Super Bowl, so Atlanta has the odds against them. However, they have showed their toughness and look hungry to avenge their loss to the Patriots last year. The NFL is full of surprises, so Atlanta could pull off the upset in the NFC Championship. It would certainly make for an enticing tale of revenge. If you are trying to place money on Super Bowl LII, you can get the betting odds from reputable online sportsbooks. You’ll see New England and Minnesota favored, but Atlanta doesn’t seem done yet.