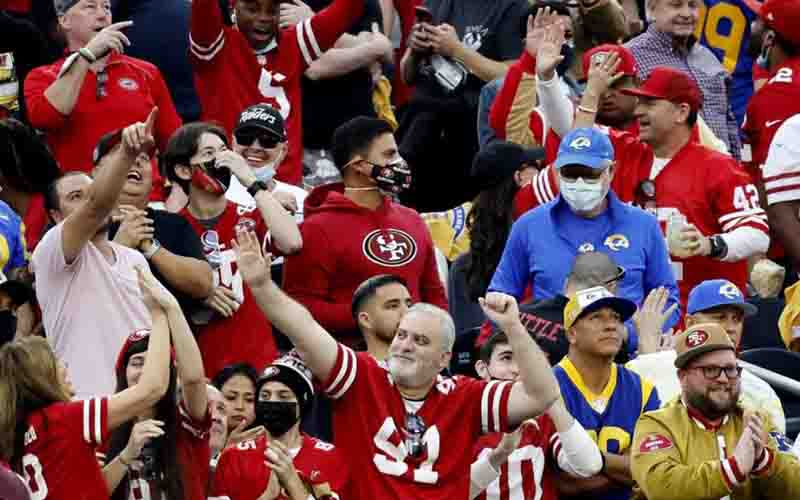 The San Francisco 49ers debuted as a -3.5 point underdog to the Los Angeles Rams for this Sunday’s NFC Championship Game, a status that they’ve held for both of their prior NFL Playoff matchups this season.

That hasn’t stopped the 49ers from winning thus far, and this weekend’s results will determine whether they’re on a historic run or if this was simply a case of their young roster overachieving ahead of schedule.

Despite what the Super Bowl 56 betting odds are suggesting, here is some rationale for why the 49ers can defeat the Los Angeles Rams on Sunday and advance to the big game against the AFC Champion.

Why The San Francisco 49ers Will Beat The LA Rams

Well over 50% of tickets sold for the NFC Championship Game appear to be in the possession of 49ers fans as of this writing. It was bad enough in Week 18 when red was threatening to overtake the amount of blue in the stands at SoFi, but now it appears that San Francisco has the outright majority and will be making plenty of noise in LA.

2. The Rams Have Lost Six Straight Games To The 49ers

One peculiar element of betting at online Super Bowl sportsbooks is inter-divisional play. NFL franchises in the same division play each other twice a year allowing for each to gain an elevated understanding of their tendencies and roster makeup. LA may be built to take down a juggernaut like the Tampa Bay Buccaneers, but their NFC West rivals still seem to have their number even though the Rams have upgraded at quarterback by adding Matthew Stafford this season.

Rams head coach Sean McVay has exhibited a nearly unparalleled level of success since taking the job, and a Lombardi Trophy is the only missing piece of his collection. Even though his Rams have been the darlings of NFL writers around the country since Stafford’s signing, McVay still hasn’t managed to parlay that into a win over San Francisco. Kyle Shannahan is the only coach that has beaten McVay after his Rams held a halftime lead, and that occurred just over two weeks ago, in SoFi, in front of a massive 49ers crowd.

49ers quarterback Jimmy G is 8-2 on the road this season, reeling off wins against the Rams, Dallas, Cincinnati, and Green Bay in their house in recent weeks. Perhaps it is due to their own Levi’s Stadium being located 40 miles away from San Francisco in San Jose.

5. San Francisco Is Out For Revenge For Super Bowl 54

Many experts seem to forget that the 49ers made it to and nearly won Super Bowl LIV if not for the 4th quarter heroics of Kansas City Chiefs QB Patrick Mahomes. There’s not been much mention of this low-key championship rematch, so before you bet on any Super Bowl 56 futures, remember that the 49ers have beaten every team remaining except for KC.