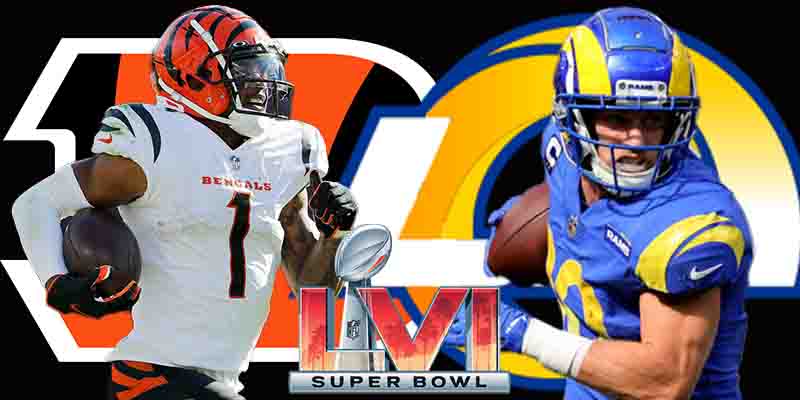 The 4 seeds from both the AFC and the NFC were able to advance to Super Bowl LVI where the Los Angeles Rams will host the Cincinnati Bengals at SoFi Stadium.

This marks the second time in NFL history that a team has hosted the Super Bowl, with the first time occurring last year in Raymond James Stadium where the Tampa Bay Buccaneers were able to defend their turf against the favored Kansas City Chiefs in SB LV.

Online Super Bowl 56 betting sites have produced game lines for SB LVI that favor the Rams by 4 which is not an overwhelming vote of confidence considering they are playing at home.

The Bengals have been leaning upon the efforts of Jue Burrow and Ja’Marr Chase, their top-flight quarterback and wide receiver combo that has been scorching opposing secondaries in the postseason.

Kupp led the NFL this season in receiving yards, receptions, and receiving touchdowns, and was the 12th player in league history to accomplish that feat.

Now have a look at Kupp’s production over the course of the Los Angeles Rams’ three NFL Playoff games en route to Super Bowl 56.

Wild Card Round vs. Arizona Cardinals

Clearly, Kupp has been producing at a level that has rarely been witnessed in the National Football League this side of Jerry Rice. Oddsmakers could easily assume another huge game from Kupp, and he is a large reason why betting on the LA Rams to win Super Bowl 56 is the favored outcome.

Kupp is not the only wide receiver whose output is impacting the Super Bowl betting odds. There is no question that Bengals rookie WR Ja’Marr Chase is destined for greatness, and his game seems to be elevating and just the right time of year.

Chase set the rookie record for receiving yards in a game when his Bengals defeated the Chiefs in Week 17 by posting the following stat line.

Chase is a big reason why betting on the Cincinnati Bengals is a reasonable option for Super Bowl 56 and that their point spread against the loaded roster of the LA Rams is not further apart than 4.

Even if you are not particularly interested in wagering on the spread or the over/under, Super Bowl prop bets for the performances of Kupp and Chase should provide intrigue to even the most turgid of NFL gamblers.

Who wouldn’t want to track the two most exciting players in the Super Bowl and lay some action on it? Take advantage of these fun Super Bowl prop bets at our top online sportsbooks listed here at LSBB prior to 6 PM on February 13th.