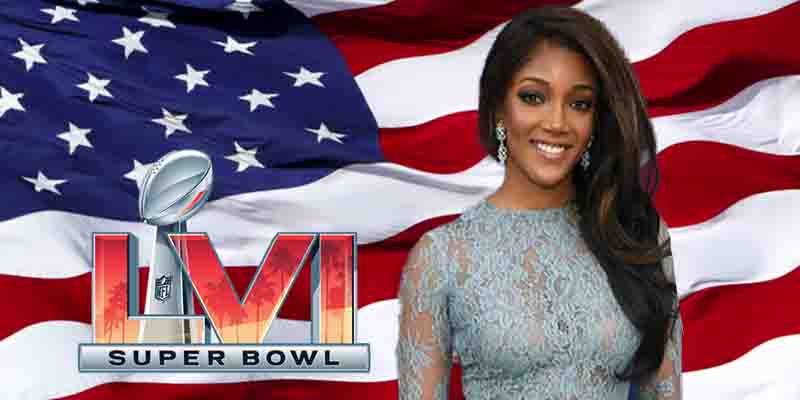 After last weekend’s National Anthem performance by Brandy at the NFC Championship Game went over so well, some were suggesting that she should do it once again for SB LVI, but it was not to be.

National Anthem performers for the Super Bowl are typically announced in mid-January, but the release of Mickey Guyton as the artist who will sing at SoFi Stadium on February 13th was unveiled just 11 days prior to the big game.

Super Bowl prop bets for the National Anthem performance are now on the boards for a variety of outcomes regarding the singing of the Star-Spangled Banner by Guyton.

One of the most common Super Bowl prop bets that are offered well in advance of any announcements being made regarding performers and participating teams is the length of the National Anthem rendition.

The above prop has set the line for the over/under at 87 seconds, which would be the shortest performance length since Jewel in Super Bowl XXXII. Consider betting the over here before oddsmakers get wise.

Female performers tend to dazzle at the Super Bowl when singing the National Anthem. The above Super Bowl betting odds favor an outcome where Mickey Guyton wears an outfit that is mostly white. Between $2 and $4 dollars can be earned on a one-dollar wager on any option as long as the correct choice is made.

Will any scoring drive take less time than it takes to sing the National Anthem?

Betting on the Cincinnati Bengals or the LA Rams to score in less time than it takes for Guyton to sing the National Anthem will require more money risked than can be earned. That’s because oddsmakers strongly believe that there will be a scoring drive that is completed in less than 87 seconds during Super Bowl LVI.

Will any word be omitted from the Super Bowl 56 National Anthem?

Flubs occur all the time from even the most seasoned performers. However, the Super Bowl is watched by a large bulk of the planet, so singers prepare vigorously in advance of the final NFL game of the year and don’t often miss a word.

A new and fun Super Bowl prop betting option that emerged in 2022 is the above aircraft flyover odds that ask gamblers to correctly select the amount of total jets involved, as well as which squad will perform the honors.

We expect more SB LVI props to appear between now and kickoff on February 13, and recommend that online gamblers partake as an alternative to betting on the Rams or Bengals and standard game lines on Super Bowl Sunday.