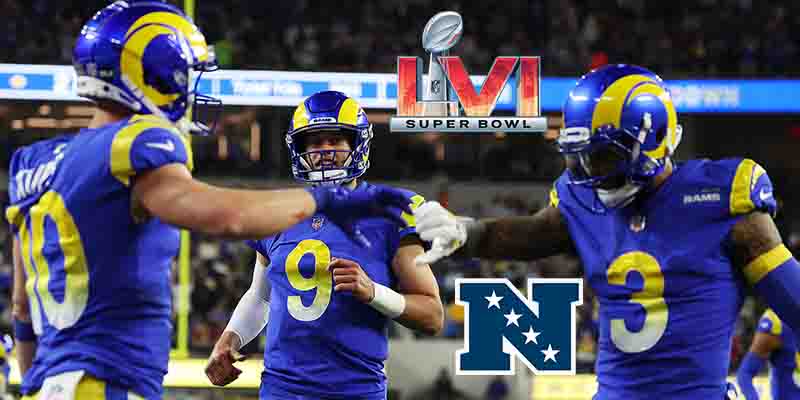 The betting favorite to win Super Bowl 56 are the Los Angles Rams who have made it to the big game as the 4 seed in the NFC.

Here is our take on why the Rams will win Super Bowl LVI and hoist their second Lombardi Trophy in franchise history when the final whistle sounds on the evening of February 13th.

Super Bowl futures odds were heavily impacted once the Rams signed Matthew Stafford during the offseason. LA became online NFL betting darlings as sportsbooks routinely featured them atop their futures odds to win Super Bowl LVI, and now they are 60 minutes away from securing payouts for bettors who laid some action on them.

While everyone seems apt to pile on the Stafford bandwagon and heap praise upon his efforts, until he wins the Super Bowl, he’s gotten the Rams no further than Jared Goff, their former QB, did. Stafford’s MVP moneyline for SB LVI places him in the lead at +130.

Cooper Kupp captured the triple-crown of receiving stats in 2021-22 by hauling in the most receptions, receiving yards, and touchdowns in the NFL. Kupp’s uptick in production is directly associated with Stafford’s arrival, and his +400 odds to win MVP of Super Bowl LVI will deliver 4-to-1 net payouts if he wins.

Anyone betting on the Los Angeles Rams to win Super Bowl 56 should also check out the prop bets associated with Cooper Kupp to get an idea of the offensive production he is in line for.

The only former Super Bowl MVP involved in the big game this Sunday is Rams defensive end Von Miller who bagged the honors back in SB 50 when his presence in the Carolina Panthers backfield caused fits for Cam Newton.

Miller’s odds to win MVP this year are set at +3300, and should prove to be some of the most tempting odds on the board due to their massive payout potential.

What casual NFL fans may not realize is that Aaron Donald is one of the top players in the National Football League today regardless of position. Last season, Donald was listed as #2 overall in the league on the NFL Networks’ top 100 player rankings.

The rankings are based on votes by active players, which is evidence of the overall game that Donald possesses. His freakish combination of size and strength not only plugs up running lanes between the tackles, but also routinely places him in the offensive backfield, securing sacks against opposing quarterbacks.

Donald, alongside Kupp, was on the Rams squad that lost SB LVIII and is intent on winning it all this time. Donald’s Super Bowl MVP odds are set at +550, so keep them in mind if you intend on laying some action on the game’s Most Valuable Player.

The secret weapon in the Rams offense is Odell Beckham, Jr., who arrived mid-season after being waived by the Cleveland Browns after two and a half seasons in Ohio.

Beckham has already matched his scoring output from his multiple seasons with the Browns in just a few short games with the Rams, indicating his prior lack of production was due to elements outside of his control.

Odell seems to be balling like his old self and is in a similar position to that of Antonio Brown with the Tampa Bay Buccaneers from Super Bowl LV. Beckham has +2200 SB MVP odds, and while we don’t expect him to become the most valuable player, we do believe he will post impressive statistics this Sunday.