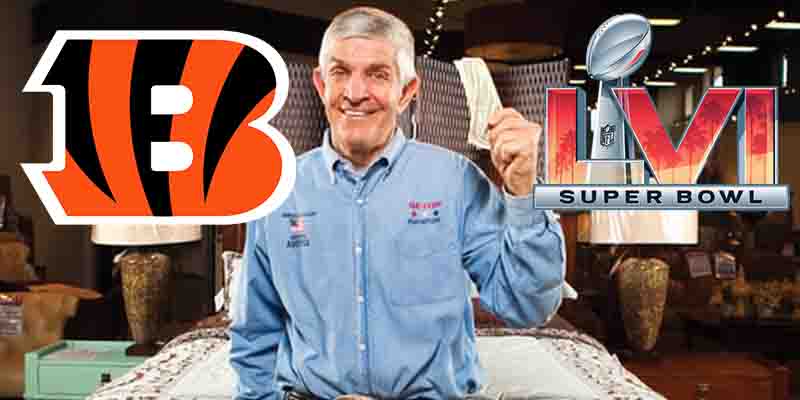 A routine phenomenon in the realm of betting on sports in the United States is Jim McIngvale, more commonly known as “Mattress Mack,” who is once again rattling the cage by placing a record-setting wager on Super Bowl 56.

Who Is Mattress Mack?

McIngvale is the owner of a chain of Gallery Furniture stores in the Houston, Texas area. Mattress Mack runs promotions attached to major sporting events like the World Series, March Madness, the CFP National Championship, Kentucky Derby, and the Super Bowl where he bets the revenue collected for bed sales and lets it all ride on one of the participating teams.

What Is The Mattress Mack Super Bowl Bet?

For Super Bowl 56, Mattress Mack has placed a 4.5 million bet on the Cincinnati Bengals and their +170 moneyline odds to win at Caesars Sportsbook’s mobile application in Louisiana.

Super Bowl betting odds of +170 will net gamblers $1.70 for each dollar wagered. Translation: Mack’s $4.5 million bet on the Bengals will net him a gain of $7.7 million if Cincinnati defeats the Rams this Sunday.

Texas has yet to regulate domestic sports betting, so Mack had to contact sportsbooks regional states to find a domestic operator that would accommodate such a large wager.

Mack made an arrangement with Caesars of LA and drove inside of their state lines so that he could place the largest single mobile wager in the history of Super Bowl betting.

If the Bengals beat the Los Angeles Rams and win Super Bowl LVI, Jim McIngvale’s $7.7 million will be used to issue refunds to all customers who purchased mattresses during the NFL betting promotion, earning them a free bed out of the entire exchange.

Because Mack is betting on the underdog, a win will also secure him an additional $2.2 million to stuff in his pockets after all refunds are issued.

Mattress Mack will also keep the original funds received when patrons purchased beds during the event because those are the dollars that were used to place the initial wager.

If the Rams win SB LVI, McIngvale will lose the bet and the money he invested, and his patrons will lose out on a free mattress. Perhaps there is a tax loophole that McIngvale plans to exploit in the event of a loss, but that’s his problem.

There’s still time to bet on the LA Rams or the Bengals to win Super Bowl LVI, as well as hundreds of prop bets to consider before Sunday’s 6 PM kickoff. Check out the top sites featured in our Super Bowl sportsbook reviews for the best NFL odds available.