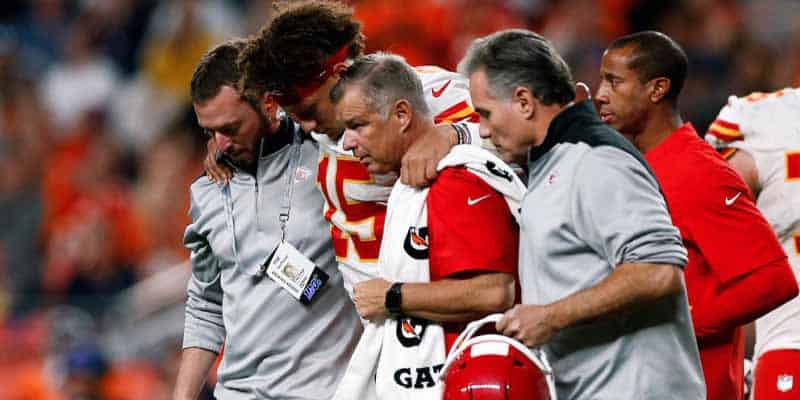 The reigning NFL MVP limped off the field on Thursday, and today, the sportsbooks have cut the Kansas City Chiefs’ odds of winning the Super Bowl in half.

In the second quarter of the eventual road win over the Denver Broncos, Chiefs quarterback Patrick Mahomes suffered what is initially being diagnosed as a right patellar (kneecap) dislocation, according to ESPN.

The injury came on a fourth drown quarterback sneak with a little over nine minutes remaining before halftime. Medical staff rushed onto the field and appeared to pop his knee back into place.

“Not too many people get hurt on a sneak,” said Chiefs head coach Andy Reid in his postgame interview. “It’s a freak thing, and it happens.”

Once the team arrived back in Kansas City, Mahomes is expected to undergo an MRI so doctors can determine whether his kneecap suffered any tears or ligament damage.

After the MRI and evaluation, if doctors find that there are any tears, then the quarterback could return to the field in as soon as three weeks.

The Chiefs defeated the Broncos 30-6, improving to a 5-2 overall record after suffering two consecutive losses. After the win, Mahomes was positive, in high spirits, and even tweeted after the game.

However, with their starting quarterback out of the lineup for close to a month, the BetOnline oddsmakers have cut the Chiefs’ Super Bowl 54 betting odds in half.

Prior to last night’s game, Mahomes and the Chiefs were second—only behind the New England Patriots—at +600 odds ($100 bets wins $600).

However, with the reigning MVP out until mid-November (as the best-case scenario), the Chiefs’ chances to lift the Lombardi Trophy have fallen to +1200 odds and fifth place overall.

Below you can find the latest Super Bowl LIV betting odds for each of the 32 NFL teams as Week 7 gets underway. Odds are from the NFL Futures section at BetOnline Sportsbook.