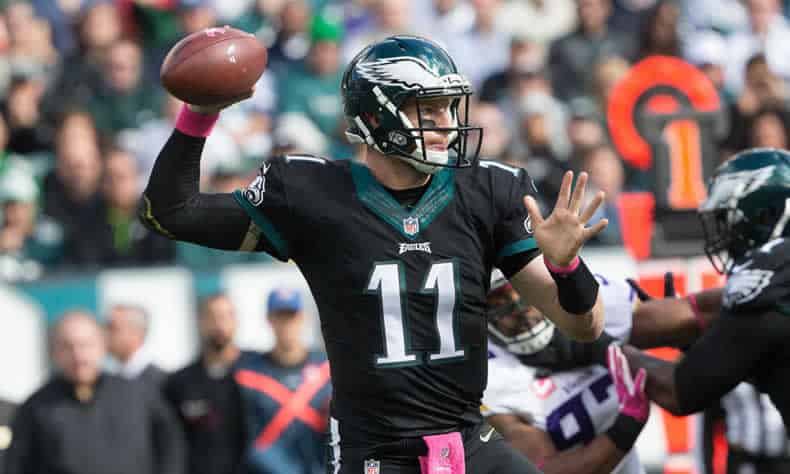 The Philadelphia Eagles have not played in a Super Bowl since 2005. Interestingly enough, that game was also against the New England Patriots. On the other hand, New England will be in their 8th Super Bowl during the Brady-Belichick era, the last of which resulting in a championship. As such, Super Bowl betting odds are set at the Patriots winning by at least 5 points. Eagles fans are riding on the hype of the underdog status, and they just may have a case for their confidence.

New England and Philadelphia both finished their regular seasons at 13-3, clinching the #1 seed in their respective conferences. It was an exciting ride for Philly fans, as second-year QB Carson Wentz emerged as a franchise quality player. Wentz’s stats were off the charts and his team began to feed off that success. He suffered an injury in a game against the LA Rams towards the end of the season, leaving backup QB Nick Foles to step up to the plate. Under Foles, the Eagles only dropped 1 game in the remaining season. The real question was whether or not he could help them in the Playoffs.

The Eagles received a first-round bye, perks of being the top seed, so Foles had ample time to prepare. Their first opponent would be the Atlanta Falcons, and although Atlanta had been struggling all year, they were the favorites. The Eagles defeated them 15-10 in a defensive showcase, proving the oddsmakers wrong. The next round saw the Minnesota Vikings come to town for the NFC Championship. Again, Philadelphia was the underdog. What was supposed to be a routing of Philadelphia turned into the opposite. The Eagles dominated the Vikings 38-7 in a statement win. That statement, which is now being echoed by all Eagles fans, is that they are not here for the noise, for the doubts, or for those who discount their success. They are here to win.

Super Bowl LII will come down to defense. The Eagles defense has a strong points-allowed statistic, meaning they don’t give up much, but that number dwindles on the road. However, US Bank Stadium in Minneapolis could feel like home depending on how many Eagles fans show up to the game. In any case, the Eagles will not want to let this opportunity slip through their fingers. They’ll go back and look at the tape from the AFC Championship, where the Jaguars contained QB Tom Brady for the entire first half. Pressuring Brady will keep him from doing what he does best. The trick is to maintain that pressure for the entire 60 minutes.

The legal Super Bowl betting predictions have the Patriots winning. In each round of these Playoffs, the Eagles should have been favored but they weren’t. Can they continue their streak of proving sportsbooks and oddsmakers wrong? Eagles fans believe they hype, but can their team back it.