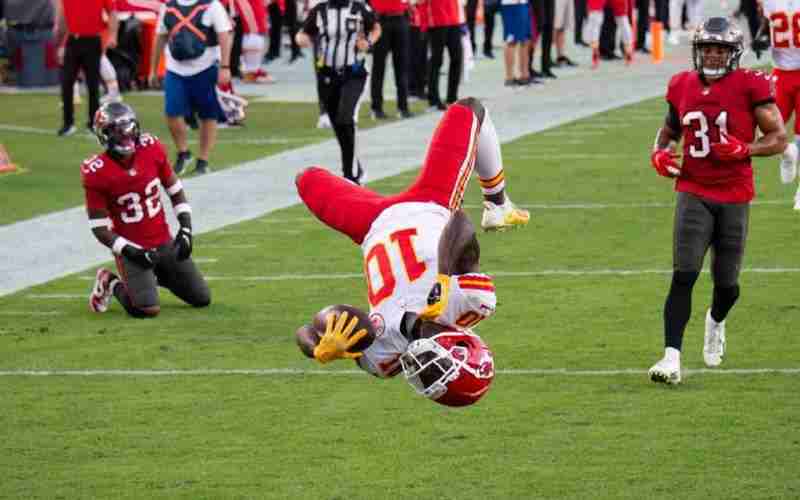 Money line bets, point spreads, and the over under continue to dominate the action at most online sportsbooks that feature NFL Playoff odds, but this Sunday’s AFC and NFC Conference Championship games feature loads of prop bets well in advance of Super Bowl 55.

The Super Bowl prop bets that populate online pro football betting sites each NFL postseason take in just as much action as the big game itself, with both options combining to create the largest betting pool for any single sporting event on the calendar each year.

While the prop bets on this weekend’s Conference Championship round may pale in comparison to the amount that will be offered for SB 55, there are more than usual this year, and we expect that trend to continue.

Take the following Tyreek Hill prop bet from BetOnline. You’d typically only see a line like this when browsing Super Bowl odds during the two weeks prior to kickoff. Now, fun prop bets can be found for each Conference Title Game, just like the lines below.

Will Tyreek Hill Backflip While or After Scoring a TD?

Speedy Kansas City wide receive Tyreek Hill is no stranger to the endzone, and occasionally does a backflip to celebrate the occasion.

His most recent backflip came after a TD that was negated, but he added in the acrobatics just to rub it in. Now his post-touchdown celebration choice can earn big bucks as the money lines on him to do it are at +700.

That means each dollar bet on Hill to do a backflip after a touchdown score will earn $7 if and when it happens. He has to score a TD first, but that’s happened a lot this season. He’s averaging over a touchdown per game with 17 scored over the course of the 2020-21 NFL season.

Bettors can cash in if he does a backward somersault and flips the odds in your favor.

Who will have the most Rushing Yards?

The Tampa Bay Buccaneers have an incredibly potent offense led by quarterback Tom Brady who many critics consider to be the greatest football player of all time.

The Bucs not only feature a multi-dimensional passing attack with talent in all directions, but they also have a two-headed monster in their offensive backfield that keep each other fresh for the duration of the game.

That means trouble for teams that find themselves behind late in the game against Tampa because the fresh runner with the hot hand can out-hustle tired defenders who are huffing wind as the clock runs out.

The above prop bet for Sunday’s game allows the choice of Leonard Fournette or Ronald Jones and asks which one will rush for more yards. NFL betting sites have placed the same odds on both occurrences, meaning bettors, and opposing defenses, won’t know which RB to focus on.

Have a look at the rest of these Conference Championship prop bets and check back with us next Monday when we begin two full weeks of Super Bowl LV coverage.

When will the Bills have their first Run Play?

Will any Player have 2 or more receiving TDs?

Will any QB throw for 400 yards or more?

Will Josh Allen lead the Bills in Rushing Yards?

Most Passing Yards in Conference Finals