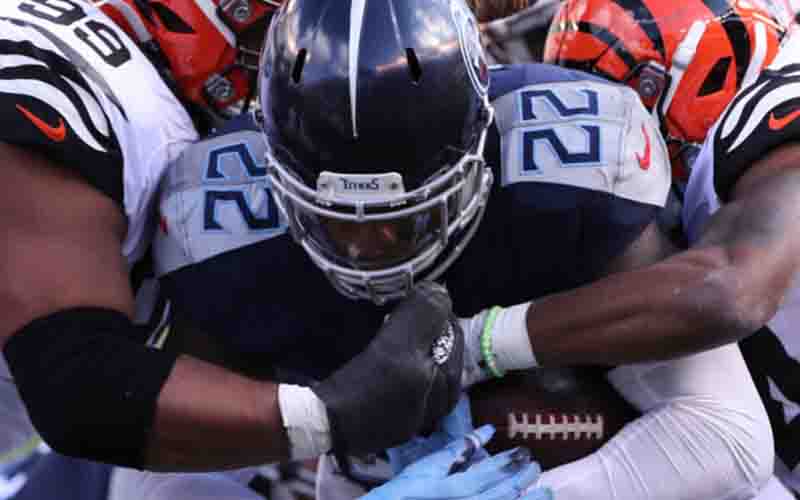 As NFL bettors await the final word on whether Tennessee Titans running back Derrick Henry will be able to return to the lineup this weekend after missing several weeks due to an injured foot, game lines have held firm placing the visiting Cincinnati Bengals as a 3 point underdog.

Henry has been cleared to practice with full contact, which is a great sign on the Friday leading into the Divisional Round of the NFL Playoffs.

An announcement regarding Henry’s availability for this weekend is expected today, and whether the news is positive or negative, the lines for betting on the NFL Playoffs are sure to move one way or the other.

At the moment, bookmakers are expectant that Henry will play. He’s had more time to rest than is traditionally required for his particular type of injury, so it would be a surprise if he were at less than full strength against the Bengals.

Here are a few things to consider about the odds for the Bengals vs. Titans posted at Super Bowl betting sites.

The Titans Have Continued To Win Without Derrick Henry

There’s no question that the inclusion of one of the league’s best running back’s on any given team will improve their chances of winning.

Derrick Henry is a game-changer, in more ways than one. Inserting Henry back into the lineup will cause the Bengals defense to perk up and take notice, and will likely cause for an uptick in their yards per carry, but it could also have the potential to disrupt any offensive cohesion they’ve built while he’s been out.

The Bengals Could Be A Team Of Destiny

Ask anyone who has been paying attention to professional football this season and they’ll likely agree that the Cincinnati Bengals are a team that is destined for a Super Bowl championship if their nucleus of core offensive players can hold together long enough.

While the Super Bowl futures feature the Bengals near the bottom of the pack, they’ve got what it takes to pour some sugar on the Titans and make a run in the 2021-22 NFL Playoffs.

Cincinnati’s offense is led by QB Joe Burrows, WR Ja’Marr Chase, and RB Joe Mixon, a three-headed monster that can hang with anyone in the NFL when it comes to placing points on the scoreboard.

That could mean trouble for Tennessee if they struggle to get their offense going early on in the game.

Neither the Titans nor the Bengals are projected highly among the final 8 teams in the Super Bowl LVI betting odds, as both are rated lower than the Kansas City Chiefs and the Buffalo Bills in the AFC futures.