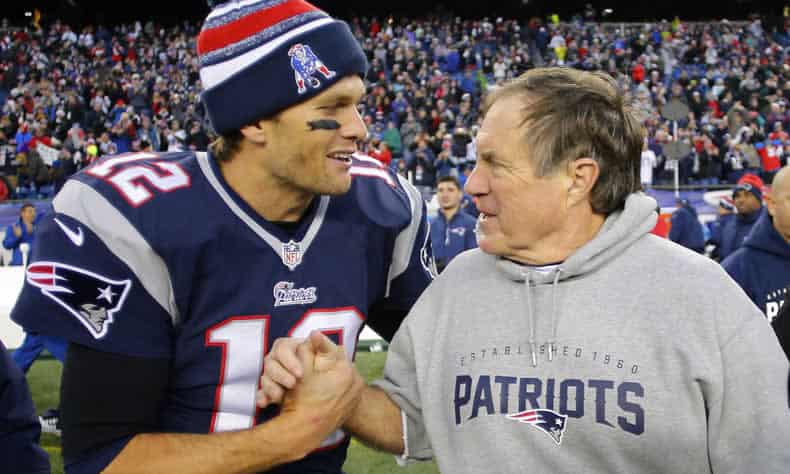 There is no denying the dynasty of the New England Patriots. Since Bill Belichick was named the head coach in 2000, the Patriots have won 5 Super Bowls. They now have the opportunity to win their 6th, which would make both Bill Belichick and QB Tom Brady the winningest pair in the NFL. With a victory in Super Bowl 52, Brady and Belichick will achieve greatness in 2 more fronts.

As of now, Brady and Belichick are the winningest head coach/QB pair in NFL history in terms of Playoff victories. They currently have 27 Playoff victory wins together, which is 13 more than second-place holders, Chuck Noll and Terry Bradshaw. If the Patriots win Super Bowl LII, they will extend their Playoff streak to 28, thus doubling the second-place record. This is the equivalent of an Olympic runner lapping his opponents during a competition. While it holds no bearing on the outcome of Super Bowl LII, it is a testament to the team’s dominance. Teamwork and sportsmanship aside, it is a testament to the success of these 2 together. As the years have gone on, new receivers, running backs and defensive members have come and go, but Brady and Belichick have remained together.

Another interesting tidbit regarding Super Bowl 52 is that it is a rematch of Super Bowl 39. In 2005, the New England Patriots and Philadelphia Eagles played each other in Jacksonville. Donovan McNabb was the QB for the Eagles at the time, and an injured Terrell Owens was his go-to receiver. The game ended 24-21 in favor of the Patriots and came down to the last minute. With this victory, New England became the first team to win consecutive Super Bowls.

Last year, New England came back from a 28-3 halftime deficit to stun the Atlanta Falcons in Super Bowl 51. Now, against the team they won to set the record, the Patriots have the opportunity to win consecutive Super Bowls again. As if that wasn’t interesting enough, most analysts are predicting a back and forth game similar to Super Bowl 39. Philadelphia’s defense will certainly give Brady pressure, and QB Nick Foles has plenty of offensive weapons to help him build a lead against the defending champions. However, it would be foolish to discount Brady’s ability in big games like this. Not to mention the talent-heavy roster of New England on both sides of the ball.

All the legal Super Bowl betting odds have New England winning this game, which would cement this team’s legacy in what will likely be their last year intact. The point spread is 4 ½ points, meaning that it is expected to be close. Brady and Belichick may not care about the more personal achievement of doubling up on the second-place Noll and Bradshaw, but winning back-to-back Super Bowls for a second time? You can bet that’s something to strive for.