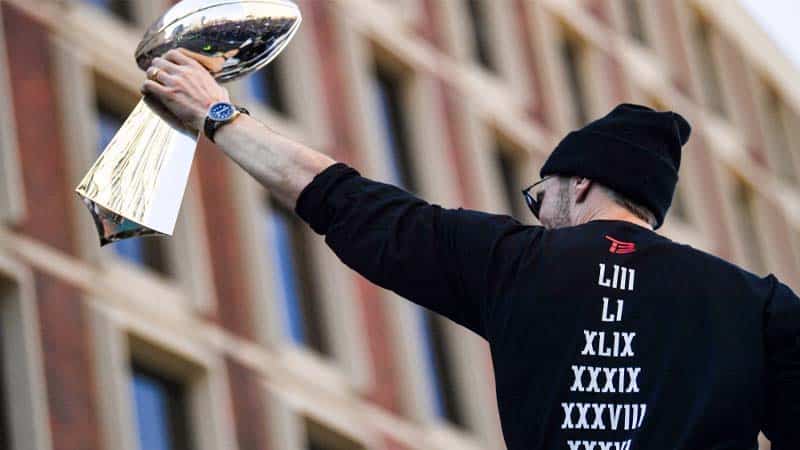 The 2019 NFL season is almost here, and the New England Patriots are listed as the favorites to win, according to Super Bowl future betting odds.

Online sportsbook Bovada has the Patriots listed at +700 to win the 54th edition of gridiron’s greatest glory.

The Kansas City Chiefs, led by reigning MVP Patrick Mahomes, check-in with the second-best odds at +800.

Drew Brees and the Saints have the third-best odds at +850.

The Los Angeles Rams, a participant in last year’s Super Bowl, and the Philadelphia Eagles are listed at +950.

The New England wrecking ball is back for more.

Belichick and Brady are chasing another round of records and accolades to add to their wildly legendary careers.

Brady could solidify himself once again as the greatest champion the sport has ever seen with a 7th Super Bowl ring—apparently, six isn’t going to cut it.

A 7th Super Bowl Championship would also break the tie the Patriots currently have with the Pittsburgh Steelers—both teams have a record six Super Bowl championships.

We all know the Andy Reid story.

A head coach with a highly storied career, the ultimate prize has always eluded him.

But he may something other than BBQ cooking in Kansas City this year.

Patrick Mahomes took the football world by storm last year and took home the MVP. He leads a Chiefs offense that is arguably the most dynamic and best in the NFL. But it’s certainly not just him—don’t let the MVP award deceive you. Tight end Travis Kelce and speed demon Tyreek Hill are a couple of his targets, and that makes for one tricky trio to defend.

If the Chiefs can clean up on the defensive side of the ball—they were ranked 31st in total defense last season—they may be able to end Andy Reid’s playoff curse and secure the city’s second Super Bowl win. It’s been fifty years!

Everyone knows what happened to the Saints last year with the “call” and the oddsmakers also know that Drew Brees is still the quarterback.

Maybe the Saints will be able to convert the “call” into motivation, but at the end of the day these guys have enough firepower on offense to get it done.

Brees, who had his highest quarterback rating ever in 2018 (115.7), arguably has the league’s best offensive line in front of him and weapons all around him. Alvin Kamara is a feared back and the Saints re-signed wide receiver Michael Thomas in the offseason.

If the defense can return as a top-15 unit like last year’s, the Saints could avenge last year’s controversial call and provide closure for the people of New Orleans.

Losing last year’s Super Bowl to the Patriots shouldn’t be too much cause for concern. They were simply outfoxed by the most feared coach in the NFL.

Ndamukong Suh is a key loss on the defensive side, but 2-time Defensive Player of the Year Aaron Donald, who had a league-leading 20.5 sacks last season, should get some help from Dante Fowler Jr. once Fowler gets more acquainted with the Rams’ system.

If the offense can sustain its firepower from last season—at least the one they had before the playoffs began—the Rams could make another charge. The Rams were ranked second in total offense last year, only behind the Chiefs.

Todd Gurley, though, is probably their biggest question mark right now. He was their go-to sled dog for much of 2018 but now has arthritis in his knee. It is the same knee in which he tore his ACL while at Georgia.

The Eagles won’t be able to wing it this season.

Foles, a legendary figure in the City of Brotherly Love, is now with the Jacksonville Jaguars.

Now it all falls on Carson Wentz, and that’s where the mystery surrounding this team begins. Wentz has a history of being injury-plagued—he blew his knee out in 2017 and had back problems in 2018—but he does have immense talent.

In 2017, he was the obvious choice for MVP but suffered an ACL tear and missed the final three games of the regular season. Foles replaced him and led the Eagles to a Super Bowl victory.

The Eagles have an enviable roster and one of the best offensive lines in the country. If Wentz can stay healthy, he may be able to lead the Eagles back to the Super Bowl and become a legend like his former backup.

Below you can find each NFL’s teams odds to win the 2020 Super Bowl, per Bovada.