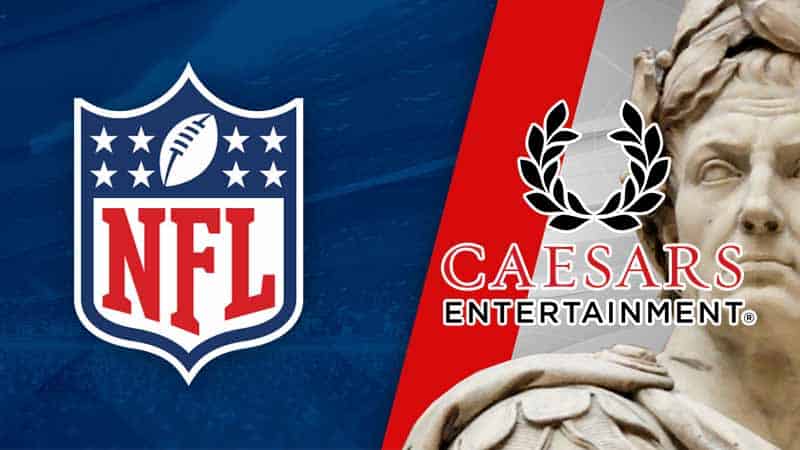 The National Football League announced on Thursday that Caesars Entertainment “will have the exclusive right to use NFL trademarks in the United States and the United Kingdom to promote Caesars casino properties and activate at key NFL events including the Super Bowl and NFL Draft.”

With this partnership, Caesars becomes the league’s first-ever Official Casino Sponsor of the NFL. The casino will begin promoting at the start of the 2019 NFL playoffs and will be featured at Super Bowl LIII.

The three-year deal worth $30 million per year and gives Caesars the right to use NFL trademarks for casino gambling promotion.

However, the NFL-Caesars deal does not include “sports betting, daily fantasy or hotels/resorts.”

This means that the Caesars would not be allowed to promote any logos relating to the NFL, Super Bowl betting, or other events at any sportsbook and will not receive any enhanced game or player data.

“We couldn’t be more excited to work with one of the world’s largest gaming and entertainment companies,” said Renie Anderson, Senior Vice President, NFL Partnerships, Sponsorship and Consumer Products in the press release.

“Combining the NFL with Caesars’ expertise in world class entertainment will provide our fans unique experiences both here in the United States and abroad.”

“Combining the league’s 180 million fans with our 55 million Total Rewards loyalty program members will expose millions of people to the exclusive and exciting year-round opportunities at our properties.”

Las Vegas, Nevada will be the site for the 2020 NFL Draft and Caesars “will host elements of the 2020 Draft in coordination with the City of Las Vegas to help create this historic event.”

The Raiders are still on track to relocate into their new stadium, which is expected to cost $1.8 billion, behind the Mandalay Bay Resort and Casino on the Las Vegas Strip before the start of the 2020 season. Additionally, the new stadium could potentially host the Super Bowl as early as 2025.