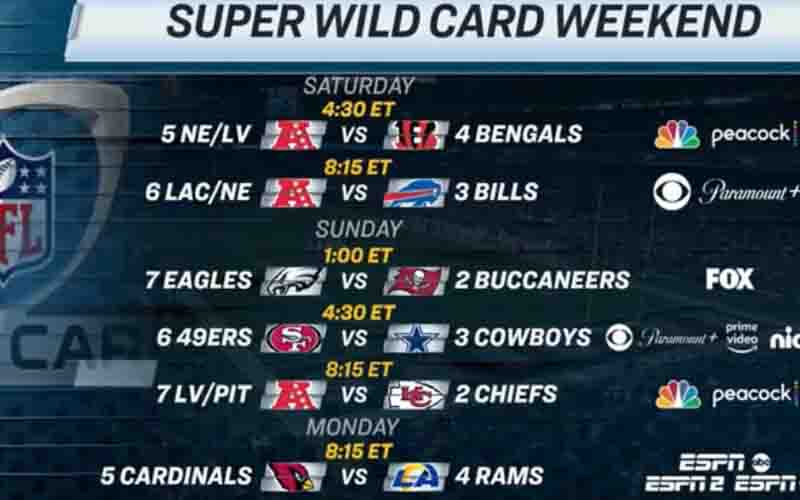 Most of the sites that are included in our list of Super Bowl betting site reviews have posted SB futures that suggest the Green Bay Packers will face the Kansas City Chiefs on February 13th in LA’s SoFi Stadium.

If those projections prove accurate, then the first round of the 2021-22 NFL Playoffs will indeed feature a Super Bowl contender as the Chiefs will host the Pittsburgh Steelers where long-time starting quarterback Ben Roethlisberger could be playing his final game.

The Steelers were able to qualify for the playoffs by beating the Baltimore Ravens last weekend and because the Indianapolis Colts were unable to best the Jacksonville Jaguars in a must-win game.

As the lowest seed in the AFC, the Steelers are the final team listed in the overall Super Bowl futures, meaning they’re the least likely team to hoist a Lombardi just a few short weeks from now.

The current NFL betting odds for playoff winners do not suggest any upsets this weekend. In fact, projecting forth through the end of the postseason only reveals one predicted upset along the way with the top-seeded Tennessee Titans losing to the Chiefs in the AFC Championship Game.

One only needs to research as far back as last year to find evidence of Super Bowl odds that implied a result that was not accurate.

The Tampa Bay Buccaneers were underdogs in the Divisional Round of the 2020-21 NFL Playoffs against the New Orleans Saints as well as against the Green Bay Packers in the NFC Championship Game, yet still advanced to Super Bowl 55 and won.

Oh yeah, the Bucs were underdogs to the Kansas City Chiefs in the Super Bowl last year. Once again in 2022, Tampa Bay is not projected to reach the final game of the season even though they finished with a better win-loss record and a higher playoff seed this year.

A dark horse contender for Super Bowl LVI is the San Francisco 49ers who will face the Dallas Cowboys this Sunday.

The Cowboys are favored by a field goal, and both teams have rosters that have returned to full health in time for their wild card playoff game.

The 49ers are just one season removed from an appearance in Super Bowl LIV where they fell to the Chiefs, and they are now three wins away from taking another crack at a Lombardi Trophy.

San Francisco’s current moneyline odds to win Super Bowl 56 at Bovada Sportsbook are set at +2200, which will reward gamblers with $22 for each $1 bet on the 49ers to become champions of the NFL if they are able to climb that mountain.

While the Super Bowl futures will remain on the boards until at least Sunday, January 30th, the day of the AFC and NFC Championship Games, wild card betting lines will expire at some point during each game this weekend – act fast.