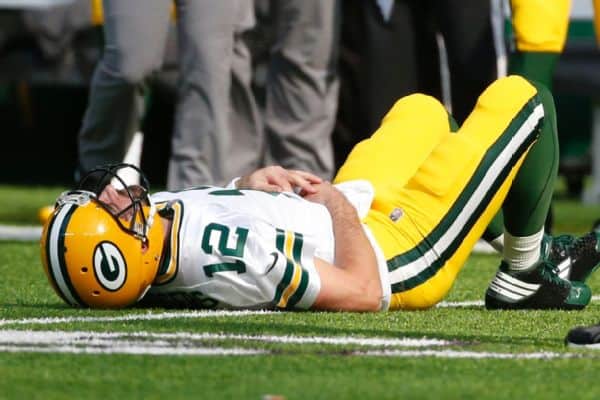 The Green Bay Packers are one of the best teams in the NFC. They lost to the Atlanta Falcons in last year’s NFC Championship game and were touted to reach the Playoffs again this year, possibly even the Super Bowl, but the odds have shifted against them with starting QB Aaron Rodgers breaking his collarbone in Week 6 against the Minnesota Vikings.

Rodgers went down with a broken collarbone in the first quarter of the game when Vikings linebacker Anthony Barr hit him into the ground. Quarterbacks are considered open targets once they leave the pocket, however, it is considered good sportsmanship to not go after them with malicious intent. Packers head coach Mike McCarthy took issue with a hit, stating he felt that Barr was overly aggressive in the manner in which he pinned Rodgers to the ground. Rodgers landed on his right side—his throwing arm—and left immediately after. On the other side, Vikings coach Mike Zimmer defended his player and thought the hit was clean. He stated that the Vikings are not a dirty team and reminded the press that football is a contact sport. If a quarterback leaves the pocket, they run the risk of getting injured.

This is not the first time Rodgers has suffered a broken collarbone. He broke his left collarbone in 2013 and missed 7 games. Analysts expect him to be out longer with this injury, as it is to his throwing arm. Rodgers is expected to undergo surgery sometime soon.

At the beginning of the season, the Packers were listed at +1025 according to the Super Bowl betting odds. These figures tend to fluctuate as the season progresses, usually because of injuries, how the team is performing, etc. Backup QB Brett Hundley is expected to take over the starting position, with practice squad QB Joe Callahan promoted to second-string. McCarthy was vehemently opposed to the notion he would be signing a veteran QB—he even lashed out at a reporter for asking about Colin Kaepernick. Hundley threw 3 interceptions after taking over for Rodgers in the game against the Vikings, which could be a factor in the Packers’ declining odds to win the Super Bowl.

The Packers are trying to remain optimistic and are attempting to shift their focus to their next game against the New Orleans Saints. This news obviously affects the Super Bowl LII predictions, and even though the Packers were never the most favored team to win, they were a dark horse contender. Bettors can still find legal betting options through updated odds and predictions, and there are also a lot of prop bets for the Super Bowl available, which helps to alleviate the stress of betting on one team.

More news is expected to come out of this story after Rodgers completes his surgery, but based on the Packers’ depth at QB, it seems their season is likely over. It is always tough to bounce back after losing one of your best players and a team leader. Stranger things have happened, but the Packers have suffered a considerable loss and will miss out on the Super Bowl because of it.