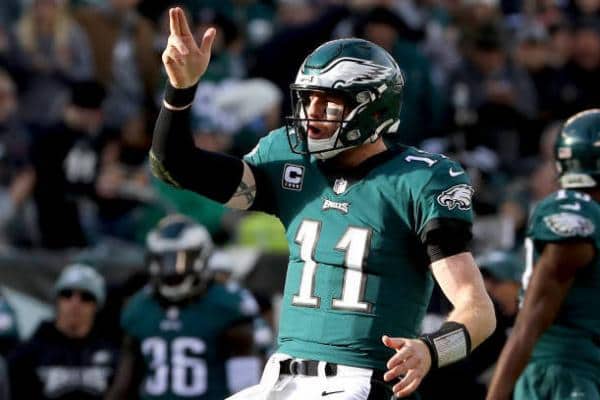 At the beginning of this season, you would never think that the Philadelphia Eagles, Minnesota Vikings, Los Angeles Rams and New Orleans Saints would be the strongest teams in the NFC. You wouldn’t think the Tennessee Titans, Baltimore Ravens, Buffalo Bills, Jacksonville Jaguars, Los Angeles Chargers and Oakland Raiders would be competing in the AFC. However, this NFL season has seen several new teams enter into the postseason and Super Bowl predictions. From a betting standpoint, this creates a different landscape because more bets are being placed on outside teams. Super Bowl betting is being blown wide open.

The biggest story out of this season has been the Philadelphia Eagles. The Eagles are soaring way above the NFC East at 10-1. The Dallas Cowboys and Washington Redskins are fighting for second place at 5-6, so there is plenty of separation. QB Carson Wentz has reinvigorated the team and is enjoying the best season of his 2-year NFL career. Wentz was drafted second overall in the 2016 NFL Draft and immediately thrown into the starting role after Philadelphia traded Sam Bradford to the Vikings. Wentz’ first season was strong as he broke several franchise records, and his second season is a continuation of this dominant track. Wentz currently has 213 completions for a total of 2,657 yards and 28 touchdowns. He also has over 250 rushing yards.

It is not just Wentz performing well. The Eagles stats confirm that they are firing on all cylinders. Their receiving corps of Zach Ertz, Alshon Jeffery, Nelson Agholor, Torrey Smith, Mack Hollins, Trey Burton and Brent Celek al have at least 100 receiving yards. With Ertz’ 639 total yards, you can see the type of range and depth the Eagles have. The run game has been successful with LaGarrette Blount leading the charge. Midseason pickup Jay Ajayi breathes new life into an already deep unit. The Eagles’ defense has gotten better as the season has progressed and has held their previous 4 opponents to less than 250 total yards.

As the postseason nears, the Eagles must maintain their performance in the closing weeks. Their lead in the NFC East is large enough to practically guarantee a spot in the Playoffs, but winning out would solidify their place as true contenders. Their remaining schedule features the Seattle Seahawks, LA Rams, New York Giants, Oakland Raiders and Dallas Cowboys. The Giants game should be a breeze, but the Eagles should be wary of the other teams, particularly the Rams, who are atop the NFC West. Outside of the Giants, all the teams left in their schedule are Playoff caliber teams. They have already beat the Cowboys and Giants in previous meetings this season, so they should stick to the game plan to keep their record intact.

Eagles fans are excited for their team, but also apprehensive because the Eagles have been here before. They’ve never won a Super Bowl, but they have gotten extremely close. However, this team has a new identity and chemistry. They are a real threat in the NFC and may have what it takes to beat the AFC’s Patriots or Steelers.

Fans can bet on the Eagles to win the game or make a series of Super Bowl prop bets. Things can change as the regular season comes to an end, and the Eagles have a target on their back, but they have shown why they deserve a shot at the Super Bowl. Despite the tough remaining schedule, the Eagles look ready to fly over the rest of the competition.