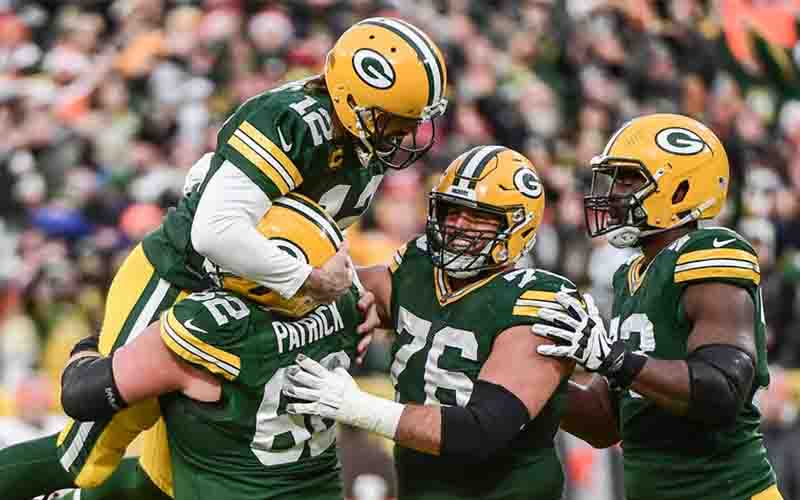 The Super Bowl 56 futures odds now project an outcome where the Green Bay Packers will win the NFC and face off against the Kansas City Chiefs at SoFi Stadium on February 13th.

The Tampa Bay Buccaneers were able to rebound nicely from their embarrassing shutout loss to the New Orleans Saints by pummeling their NFC South rival, the Carolina Panthers, by a final score of 32-6.

The damage has been done by the Bucs in the minds of NFL line setters as the Packers are now 350 points ahead of Tampa Bay in the moneyline odds to win Super Bowl 56.

The above Super Bowl odds provided by Bovada Sportsbook feature the Chiefs and the Packers with the same moneyline at the moment, but if you shop the odds around the web, KC is getting the edge more often than Green Bay.

The New England Patriots have also undone much of the good work they accomplished during the midseason by dropping their last two games to the Indianapolis Colts and the Buffalo Bills, respectively.

While there is no shame in dropping a regular-season contest to a playoff contender, it does impact the overall NFL playoff seeding and forces teams that were in a position to host postseason games to now try and win on the road.

Road teams aren’t often successful in the NFL Playoffs, and oddsmakers are keen on that fact. Gillette Stadium is an imposing venue for visiting teams to try and operate within, especially during the playoffs.

Without home-field edge, the Patriots are incredibly suspect, and their reduced Super Bowl LVI odds to win reflect that reality.

The Los Angeles Rams are also regaining the form of their pre-season projections and have a legitimate shot at winning the NFC West.

The Rams are currently tied with the Arizona Cardinals for the division lead with the eventual winner likely hosting a playoff game between the two of them.

The NFL sportsbooks that populate our list of Super Bowl betting site reviews may be leaning toward the Chiefs as the overall champion at the moment, but that was not true at midseason.

Patrick Mahomes has become comfortable with his new teammates and has the offense clicking just in time to take a crack at his third Super Bowl appearance in a row.

Mahomes would like nothing more than to rip a title from the hands of Aaron Rodgers, but wouldn’t it be triple-sweet if he could get revenge on Tom Brady for Super Bowl 55?

Kansas City’s path to the Super Bowl appears to be much easier than those facing off on the NFC side of teh NFL Playoff bracket, and is evidenced by their bunching at the top of the SB 56 odds.

A $1 bet on the Chiefs or the Packers to win SB LVI will reward gamblers $4.00 if the wager is a winner.