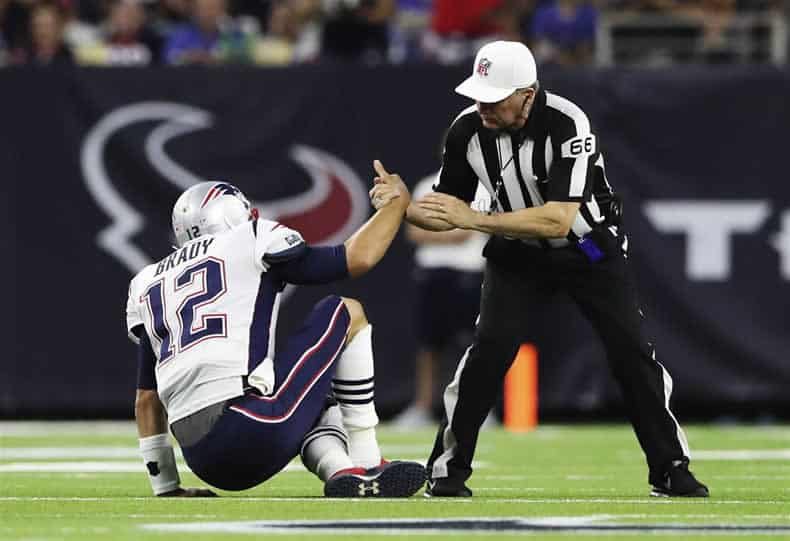 After the AFC Championship against the Jacksonville Jaguars, rumors of conspiracies, bias and unfair treatment began to surface again. The Patriots have had their fair share of controversies, most notably Spygate and Deflategate, which have cast some doubt on the legitimacy of their dynasty, but the AFC Championship controversy is the freshest example of any issues. Pats fans cite jealousy as the reason for these theories, and there is some credibility to that argument. After all, everyone hates the best team, especially when they win repeatedly. One cause for concern is that these controversies, if true, can alter the legal Super Bowl betting landscape. If the game is fixed, bets are skewed and many people lose. Let’s examine some of the alleged problems with the Patriots in their latest qualm.

Some people see the constant accusations towards the Patriots as played out as the fact they keep on winning. It is certainly possible that they are that good. If you look at the AFC Championship, there are several instances Jags fans cite as probable cause for these conspiracies. However, watching the game looking for flags and signs of a deep-rooted bias issue is no way to approach the NFL or Super Bowl LII. If anything, it takes away from the lure of the sport. Be that as it may, Patriots-opponents are not backing down.

Take the amount of penalties called, for example. In most games, there are numerous penalties for both teams. Whether it be pass interference, offsides, roughing the passer, unsportsmanlike conduct, etc., these penalties can have a major impact on the game in terms of yards lost. In the AFC Championship, the Patriots were only flagged once for 10 yards. On the other hand, the Jags were flagged 6 times for a total of 98 yards. Is this evidence of a ref bias towards the Patriots? Or is more an example of a well-disciplined team versus a team of young up-and-comers? After the game, multiple Jags players commented on the discrepancy in penalties, but most were humble enough to admit that they couldn’t blame the loss entirely on that, because at the end of the day, they simply didn’t execute. For example, the Jags had 2 timeouts left with the ball and :55 seconds left in the first half, yet they didn’t use them. That falls on the coach, not the refs.

Another instance of questionable calls came with a pass interference call on A.J. Bouye that put the Patriots in scoring position. If you look at the play, Bouye cuts off the receivers. He has his hands on him for a second, which technically is grounds for PI. Fans may be bitter on the soft call, but Bouye should have known not to put his hands on the other player.

Perhaps the most controversial call was a Myles Jack fumble recovery off Dion Lewis. Lewis was ruled down on the field, but the call was questionable because it appears Jack stripped the ball off Lewis before that happened. The replay booth upheld the call, and while the Jags got the turnover, they lost out on a potential touchdown. Arguments have been made over the ruling, but in the NFL, what’s done is done.

The thing with this Pats-ref conspiracy is that it is hard to stand on completely because teams control their own destiny. A penalty call can reverse momentum or set up a touchdown, but there are plenty of instances of teams shutting down by their own design against the Patriots. The refs didn’t help Danny Amendola get wide open to score a touchdown, the refs didn’t drive down the field in the fourth quarter to put their team in a winning position and the refs didn’t coordinate the defense to stop the Jags on their last drive. People will always have something to say about the Pats and the refs, but their talent and ability to close out games speaks for itself.

The Eagles will be mindful of this in Super Bowl LII. Predictions say the Pats will win by 5 or more points. Many are banking on the refs helping them achieve this, but we won’t know for sure until the big game. If the Eagles want to help their case against this alleged conspiracy, they should worry about closing out the game and not giving up cheap penalties.