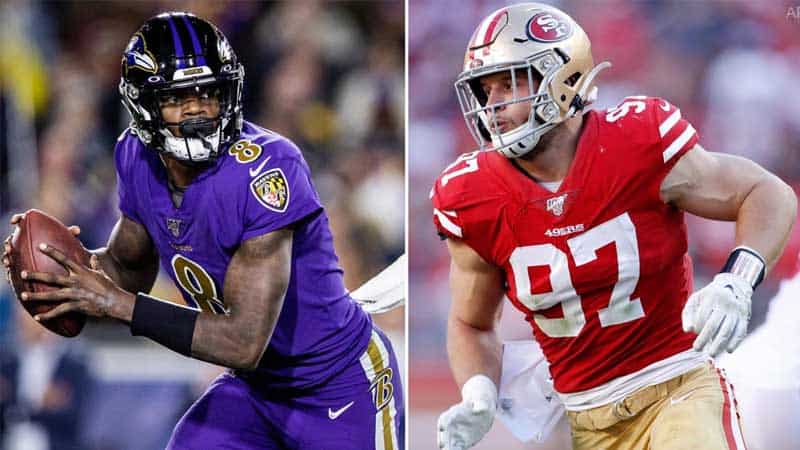 Could we be headed for a Super Bowl XLVII rematch between the Baltimore Ravens and San Fransisco 49ers?

That’s good news for Ravens’ fans, who saw their team win 34-31 back in 2013. For 49ers’ fans, well, you may want to take a knee like Colin Kaepernick before reading further.

According to the oddsmakers at legal Super Bowl sportsbooks, the NFL two teams are currently the favorites to win the AFC and NFC championship heading into the Divisional Round of the 2020 NFL Playoffs, with the Ravens getting a slight edge.

Last weekend’s Wild Card Round was full of upsets, and none were more significant than the defending Super Bowl champion New England Patriots getting knocked out in the first round of the playoffs.

The dream of lifting the Lombardi Trophy remains intact for the remaining eight NFL teams—four teams in both the AFC and NFC. But after this weekend, four teams will play in the conference championships, where the winner will take their talents down to South Beach on February 3, 2020.

The following are the legal betting odds for Super Bowl LIV and the 2020 AFC and NFC Championship, as well as each of the Divisional Round betting lines for this weekend’s matchups. Bovada Sportsbook is currently accepting wagers, and everything below can be found in the Football section.

Odds To Win The AFC Championship

Odds To Win The NFC Championship