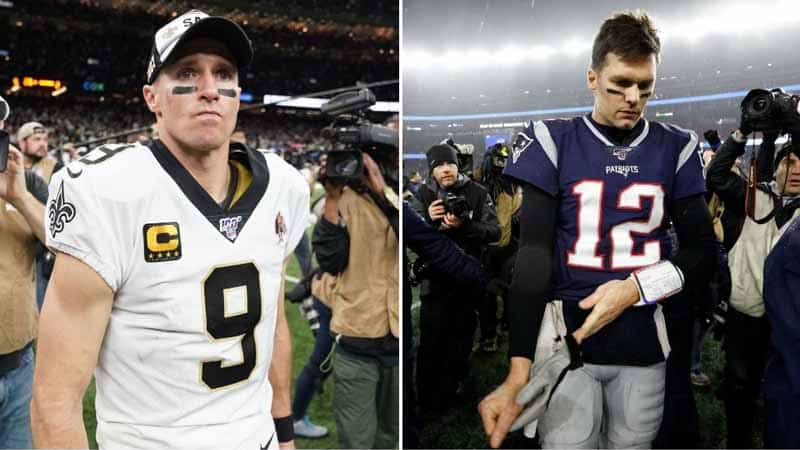 It was as if when the clock struck midnight for a new decade, the era of the old guard was officially over.

Both Tom Brady and Drew Brees—two of the greatest quarterbacks to ever play the game of football—were knocked out of the 2020 NFL Playoffs over the Wild Card weekend after receiving favorable odds from the legal Super Bowl betting sites.

The New England Patriots were the preseason Super Bowl favorites at +700 odds coming into the 2019-20 season, but the dreams of winning their seventh ring were dashed by Mike Vrabel, a former player under Bill Belichick and now the coach of the Tennessee Titans.

After Deshaun Watson lead the Houston Texans to a comeback 22-19 win in overtime over Buffalo Bills in the first Saturday matchup, the Titans pulled off a 20-13 upset on the road against the Patriots.

Belichick’s defense never had an answer for Titans running back Derrick Henry, who had a monster day on the ground, carrying the ball 34 times for 182 rushing yards and plowing into the endzone for a one-yard touchdown in the second quarter.

With the Super Bowl 53 champions out of the playoffs and the last year’s runner-up not qualifying for the postseason, there will be no title defense or redemption plot this year—a new team will lift the Lombardi Trophy on Feb. 2, 2020.

But the upsets were far from over, and two teams suffered all-to-familiar fates in their respective Sunday matchups.

In the first game, the road underdog Minnesota Vikings won 26-20 over the New Orleans Saints in overtime after quarterback Kirk Cousins threw a perfect ball to tight end Kyle Rudolph on a 4-yard fade.

In the video replay, Rudolph appeared to push-off the defensive back to get separation, but despite NFL implementing a new rule to review for potential pass interference—resulting after last seasons’ blown call against the Saints in the NFC championship—the officials choose not to take a look at the play and blew the whistle to end the game.

And with that decision, the Saints have now lost on the final play of the game for the third consecutive year in the NFL playoffs.

Heading into the final game of the day, the heartbreak hotel chose to remain open.

Nine plays. That’s how many plays Carson Wentz, who’s history of getting injured at the most inopportune time is well-documented, ran before getting knocked out of his playoff debut.

Following his exit, the Philadelphia Eagles would stay competitive but ultimately, Russell Wilson and the Seattle Seahawks proved to be too much to handle and handed the Wentz-less Eagles a 17-9 loss at home.

Now, only eight teams remain heading into the Divisional round. Below you can find the complete list of legal betting odds for Super Bowl LIV immediately following the Wild Card weekend. These odds and more are currently receiving action in the NFL futures section at Bovada Sportsbook.