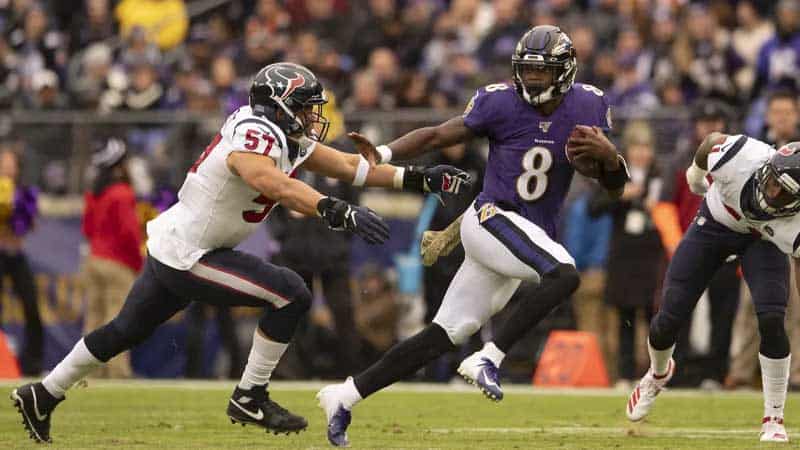 MVP candidate Lamar Jackson and the Baltimore Ravens appear to be unstoppable after another dominating performance in NFL Week 11.

And the bookmakers at NFL betting sites have taken notice and now list the Ravens in second place, according to the most recent Super Bowl 54 betting odds.

At +500 odds to lift the Lombardi Trophy this season, the Ravens currently have the second-best chance of winning it all with a 16.67% implied probably. Their odds come in behind the New England Patriots, who remain the favorites at +240 odds, or a 29.41% chance to repeat as Super Bowl champions.

The Ravens are currently on a six-game winning streak, which includes a month’s worth of impressive wins over the Seahawks (30-16), Patriots (37-20), Bengals (49-13), and most recently against the Texans (41-7) this past Sunday.

Their upset victory over the then-undefeated Patriots has played a huge factor in their increase chance of winning the Super Bowl.

Prior to exposing the Patriots in Week 9, the Ravens were listed at +1800 odds, 5.26% chance, and sat in the seventh position on the board. However, oddsmakers doubled their chances to +900 odds, 10% implied probability, which placed them in fifth immediately following the upset.

After slaughtering both the winless Bengals last week and a much stronger team in the Texans, the bookmakers clearly want to avoid leaving the red-hot Ravens on the board with too much value.

Even with the Ravens odds at +500, which would win $500 from a $100 wager, you can bet their potential payout will continue to decrease if their winning streak continues since it would simultaneously result in their Super Bowl chances increasing.

Below you can find the latest legal Super Bowl LIV betting odds for all 32 NFL teams, which are from the NFL Futures section at Bovada Sportsbook.