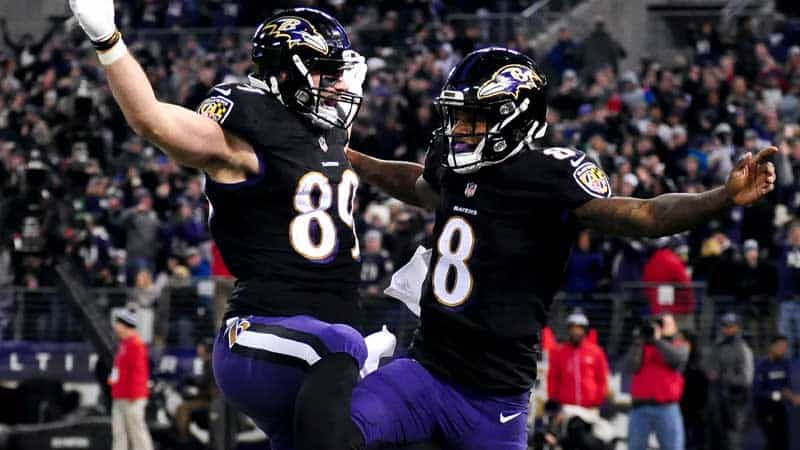 With an MVP frontrunner at quarterback leading an unstoppable offense and an elite defense shutting down everyone, it’s no surprise to see a new team at the top of the latest legal betting odds to win Super Bowl 54.

And after nine straight wins, the Baltimore Ravens have finally overtaken the New England Patriots to become this year’s Super Bowl favorites.

When adjusted to see a percentage chance to win the Super Bowl, we can see that the oddsmakers believe the Ravens have an approximately 31.25% implied probability of winning it all with three games left in the 2019 NFL regular season.

Looking back at just how far John Harbough, Lamar Jackson (who’s a near-lock to win MVP), and the entire team has climbed since the start of the season, the Ravens’ Super Bowl odds were listed at +4000 at the end of the preseason—ranking near the middle of the pack with roughly a 2.44% chance.

If you bet $100 on the Ravens to win it all before the season opener, then you’ll win $4000 if they cap off their season with a title.

The New England Patriots fall to the second spot at +450 odds, an 18.18% implied probability, and have been slumping ever since their 37-20 road loss to the Ravens in Week 9.

After beginning the year as the Super Bowl favorites, listed at +700 odds with a 12.50% chance, the Patriots increased their odds to as high as +220, 31.25% chance—but then Jackson and the Ravens handed Bill Belichick and Tom Brady their first loss of the season.

Now, the Patriots have fallen to a 10-3 record and haven’t shown any signs of turning things around.

With that said, it’s not wise to bet against an NFL dynasty that’s lasted nearly two decades, and until they are knocked out of the playoffs—when it matters most—all bets are off.

Below you can find the current Super Bowl LIV betting odds for all 32 NFL teams, which can be legally bet on in the NFL Futures section at Bovada Sportsbook.