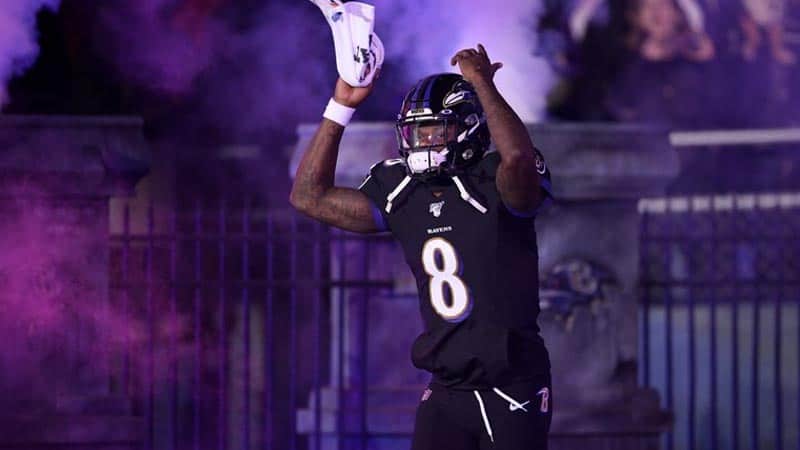 It’s starting to look like even The Pit and the Pendulum wouldn’t be able to slow down the Baltimore Ravens.

The scariest part is that the Ravens look like they are still getting better.

And according to the latest Super Bowl 54 legal betting odds, it appears the pro football oddsmakers agree, increasing the gap between them and all other NFL teams.

The Ravens became the SBLIV favorite last week and received +220 odds (bet $100 to win $220), dethroning the New England Patriots in the top spot in the process.

At +220 odds prior to NFL Week 15, the oddsmakers gave the Raven an approximately 31.25% chance to win Super Bowl 54 after converting to a percentage-based implied probability. The Patriots, along with the San Fransisco 49ers, were listed at +450 odds, implying they both had an 18.18% chance to win it all.

Heading into Week 16, the Ravens received a slight bump on the Super Bowl futures odds board after NFL MVP favorite Lamar Jackson and the team drubbed the New York Jets by a score of 42-21 on Thursday Night Football.

Now, Baltimore is listed at +210 odds, which gives them a 32.26% chance to lift the Lombardi Trophy. However, the main takeaway isn’t their rather negligible increase.

Instead, it’s how the Ravens are widening the gap between them and the other NFL playoff contenders.

According to the latest listing, the New Orleans Saints come in second on the board with +550 odds, which means the oddsmakers are giving them a 15.38% chance.

With a difference of 16.88% implied probability, the Ravens are now the biggest favorites to win the Super Bowl when compared to the next closest team. No other team through the 2019 NFL regular season has held a margin this wide.

Additionally, the Patriots, who were the favorites for the majority of the season, fall to the third spot at +600 odds, a 14.29% chance.

The Kansas City Chiefs continue to pick up momentum and vault up to the fourth place with +650 odds, 13.33% chance—a slight increase from their +700 odds, 12.50% improbability, from a week ago.

The 2019 NFL regular season is beginning to come to a close, and after this week’s slate of games, there will be only one week left in the regular season and the Super Bowl odds board will be cut to 12 teams in total—six for the AFC and six for the NFC.

The current legal betting odds for Super Bowl LIV, which includes the remaining playoff-eligible NFL teams, can be found below. Action is available at Bovada Sportsbook’s NFL futures section.