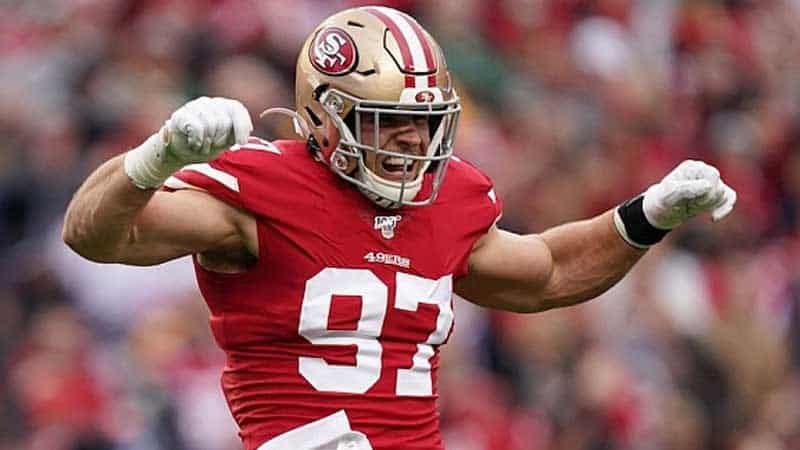 Almost all major sportsbooks favor the Kansas City Chiefs to win Super Bowl 54 in a close contest.  Can Kyle Shanahan and company defy expectations and start a new dynasty in San Francisco?

The San Francisco 49ers are no stranger to success in the Super Bowl.  They’ve been to the big game six times and have won five Lombardi trophies.  The 49ers’ last Super Bowl appearance was the only time San Francisco has lost on championship Sunday, a 34-31 defeat at the hands of the Baltimore Ravens in 2013.

It has been said that running game and defense travels well.  The 49ers have a heaping helping of both, and the adage has held so far in 2019 as San Francisco has compiled a 7-1 record on the road.  Still, the 49ers odds to win Super Bowl 54 have them listed as an underdog.

When all cylinders are pumping for the 49ers, the running game keeps the game clock ticking by getting first downs and extending drives.  This causes the opposing offense to remain on the sidelines longer, and in theory, they’ll score less due to possessing the ball for less time.

The defense works in tandem with the running game.  When the opposing offense is on the field, their drives are kept short or are limited to a field goal opportunity.  The other team is under pressure to score quickly and is more prone to a turnover causing error.

Will this work against Kansas City?

In both of Kansas City’s playoff games, they have overcome early deficits.  The Houston Texans built a 24-point lead before the Chiefs came surging back and ended up winning by 20.  The Tennessee Titans jumped out to an early ten-point lead, only to lose the game by 11.

So, what went wrong for the Titans and Texans?

Inevitably, the Chiefs are going to start scoring points in bunches.  Once the Kansas City offensive train starts chugging along, they are going to keep putting points on the board until the clock hits zero.

What San Francisco must do is hop out to an early lead, which Tennessee and Houston have provided the playbook for, and then continue to score points.  The 49ers cannot panic once Kansas City starts scoring.  They need to retain their poise and continue to go to work.

San Francisco cannot fall into the trap of trying to keep pace by passing the ball on every down.  Jimmy Garoppolo has shown that he can put the team on his back and deliver a victory several times this season, but you don’t want to rely on his passing prowess in the biggest game of his lifetime.

It’s the Chiefs.  They’re elite.  The 49ers can’t hope to shut them down completely, so they need to be patient and continue to run the ball, even if it seems like the Chiefs are getting ahead or gaining momentum.  Eventually, the Kansas City defense will wear down, and rushing holes will begin to open up.

As James Jones of Sports Illustrated suggests, San Francisco cannot expect to contain Mahomes completely, but defensively, they’ll need to keep their foot on the gas pedal and maintain pressure.

If San Francisco can manage to stick to their game plan and use the tools that got them to the big game, eventually Kansas City will become one-dimensional and more desperate on offense.  They’ll need to take greater risks, and that could pay off in the form of turnovers for San Francisco’s defense.

If they can stay true to their team makeup, San Francisco can defy all the big game predictions and bring home a 49ers Super Bowl ring.