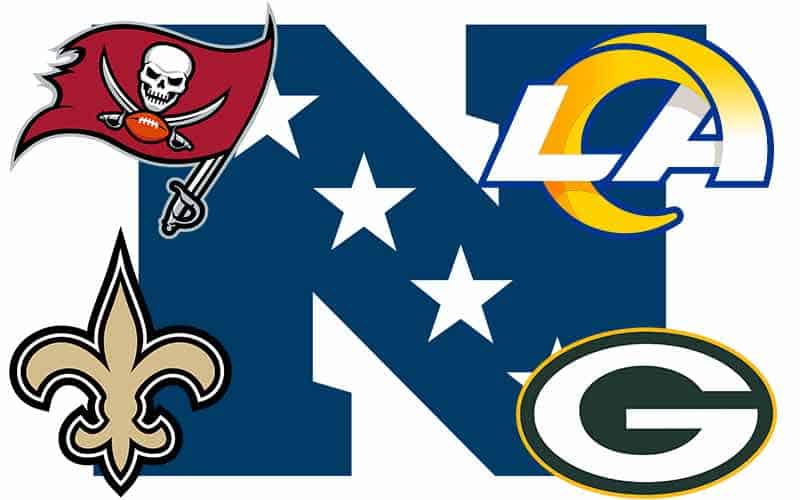 The Divisional Round of the 2021 NFL Playoffs is here, and now, there are only eight remaining teams in the Super Bowl 55 futures betting lines.

The Green Bay Packers, New Orleans Saints, and Tampa Bay Buccaneers were expected to be in the final four of the NFC Playoff bracket, but not the Los Angeles Rams.

LA struggled mightily last season, so much so, that oddsmakers and Super Bowl betting sites didn’t give them much of a chance for success in 2021. Three-quarters of the way through the season, the Rams found themselves atop the NFC West and inching towards the top of the Conference.

They dropped a few late games and fell to the 6th seed Wild Card spot, and now find themselves as one the final eight teams left that are fighting for a chance to reach Super Bowl LV.

Jared Goff and the Rams would like avenge their Super Bowl LIII loss from two years ago to the New England Patriots, but Aaron Rodgers is looking for a second ring before he exits the game. 37 is not what it used to be, as top QBs now play well into their early 40s, but time is not on Rodgers’ side.

Rodgers has discovered newfound success since head coach Matt Lafleur joined the team in 2019, and now they are looking to capitalize on their potent combination to earn the 2021 Lombardi Trophy.

Oddsmakers believe that Green Bay will win by 7 points or more, with a final score in the neighborhood of 26-19.

The Tampa Bay Buccaneers seem to be hitting their stride at just the right time as all of the pieces of their offense are playing at top level and allowing Tom Brady to distribute the ball without concern for any particular players’ statistical goals.

That could spell trouble for a New Orleans Saints squad that has already defeated Tampa Bay twice this year. Will the third time be the charm for Drew Brees, Alvin Kamara, Michael Thomas, and company?

The Saints are favored by 3, but in the NFL Playoffs, anything can happen, especially when two offensive juggernauts like Brady and Brees are competing against each other.

If Tampa can manage to win this game, and there is ample reason to think they can, the Super Bowl odds will experience a seismic shift for next weekend’s game, as bettors will not be able to contain themselves from dropping loads of cash on the potential of another Tom Brady Super Bowl.

Be sure to tune in on Saturday and Sunday to check out these games, and check back with us next week for betting previews of the NFC and AFC Championship Games.