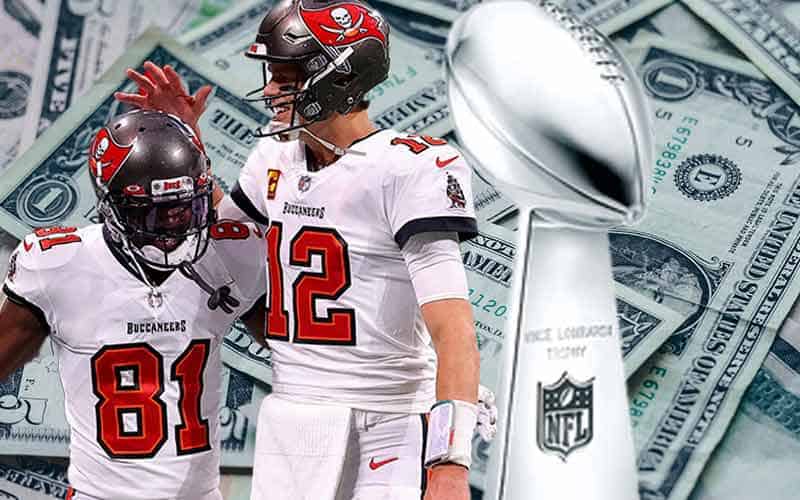 Tom Brady has been to more Super Bowls than 31 out of 32 NFL franchises. The only team that has been there more times is the New England Patriots, Brady’s former home.

Brady has lost 3 Super Bowls. That’s not the record, but if he loses to the Kansas City Chiefs on February 7th like the Super Bowl betting odds imply, he will tie that all-time NFL mark as well, pulling alongside Jim Kelly (Buffalo Bills) with 4 losses.

What Brady is bringing to Super Bowl Sunday is his most potent offensive unit in over a decade featuring a trio of A-level wide receivers and his trusty old tight end, Rob Gronkowski, who has retuned to top form as of late.

Although Brown struggled to find his spot in the offense among great talents such as Gronkowski, Mike Evans, and Chris Godwin, the relationship between him and Brady flourished at times, with him appearing to rise to the level of play that made him famous in Pittsburgh.

Tampa Bay was able to get by the Packers in the NFC Championship Game despite Brown missing the game due to injury. CBS Sports is reporting that Brown is expected to return to the lineup in time for Super Bowl 55, and is now featured as a prominent option in recent Super Bowl MVP prop bets.

The below betting line for Super Bowl 55’s Most Valuable Player has Brown listed as the 11th overall option with +5000 money line odds.

That means that this above Super Bowl prop bet can payout at $50 for each $1 wagered on him. When Brown and Brady get on the same page, defenses pay the price, so why not profit off of their excellence and consider some of the above MVP props while the odds are so high.

One caveat to Brown winning the MVP of Super Bowl LV is that much of his production is entirely dependent upon Tom Brady delivering him the ball.

Brady’s +200 MVP odds suggest he has a much higher probability of earning the trophy after Super Bowl 55 concludes and the historical data backs it up. Out of the previous 54 Super Bowls, QBs have won the award 30 times as compared to WRs winning the honors 7 times.

That’s 56% vs. 13%, hardly comparable, and that’s exactly why the oddsmakers have placed the most favorable odds on SB 55’s two starting quarterbacks.

If Antonio Brown is going to secure the SB LV MVP award he will likely need a performance similar to his stat line in Week 17 where he caught 11 passes for 138 yards and two scores.

Over the last five games that Brown has played in, he has scored a touchdown in four of those contests, with the only shutout occurring against New Orleans during the playoffs where he exited the game early.

Whether Brown wins the MVP or not, his presence will have a major impact on the game’s proceedings, and will cause the Super Bowl odds to shift across the boards if he can’t suit up on February 7.

Below are the current odds and information for Super Bowl LV. Keep checking back as our staff is working overtime to bring you the top betting angles for Super Bowl 55.